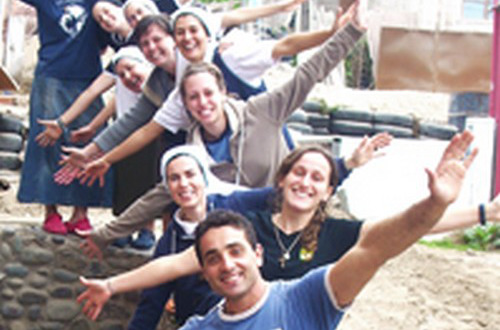 A response to be ill-being of young people.

The Cenacle was founded in Turin in 1983 by Sr Elvira in response to the ill-being of many young people, lost in the world of addictions and often marginalized.

« We are family of « public sinners » people enlivened and saved by the Lord who bent over us when we were in the mud of sin. We are a community of men and women who have experienced that the Lord’s Mercy is far greater than the errors and wounds of evil ». Sr Elvira

To the uneasiness of young people free education, the Cenacolo offers a simple, family-like, community life style : sincere friendship is the basis of our human relationships and fraternity. Rediscovering work lived as a gift and a commitment to maturing in life’s responsabilities, prayer and faith in Jesus Christ are, in all, the response to the infinite need which dwells in the hearts of mankind. Those who are welcomed in Cenacolo feel at home and rediscover their sense of dignity, the joy of living.

This path is also offered on a parallel to the families of the young people welcomed in the community.

The Cenacolo is present in numerous contries in more than 60 « fraternities ».

On June 15th 2015, the Cenacolo was officially recognized by the Catholic Church as an International Association of the faithful according to pontifical right.

The Cenacolo realized missionay works in which many children roaming on the streets, abandoned are welcomed in homes run by young volunteers who are committed for a minimun of two years. These young missionaires provide a family atmosphere in which the children can recover from their trauma, feel welcome, loved, educated and trained to become responsible and confident in Life.

« I have always wanted to be a missionary but the doors on which I knocked were closed to me because I was a drug addict. I joined Cenacolo where I discovered that my first mission was to restructure my way of living in order to become a responsible person. After three years making my way to this goal, Cenacolo trusted me and sent me to Brazil as a missionary to work with the children of the streets ». Jerome

« After spending some time with Cenacolo, I offered to go on the missions. This way I realized an « old dream » to do something for abandoned children. I lived in Peru for several years and today, I am on mission in Liberia, Africa. Life is always fulfilling with teenagers and children : seeing them grow up and develop their talents fills me with joy ». Sabine