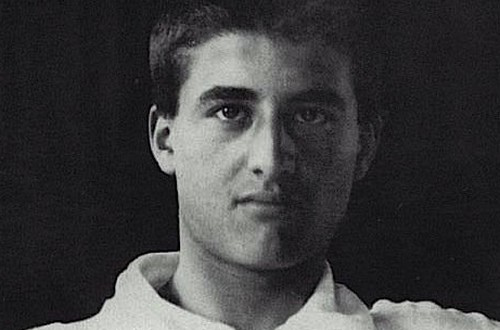 Pier Giorgio was born on April 6th 1901, in Turin. He was the eldest of two children.

From childhood, Pier Giorgio loved the Lord. He used to pray and receive Holy Communion every Sunday. He prayed the Rosary because he loved the Blessed Virgin very much. He was also very moved by the suffering of others. One day, he jumped into icy water to save the life of a little girl who was skating and fell into a hole in the ice.

Another time, he was alone at home when a poor old lady came asking for money. What could he do ? He was struck by an idea. Pier Giorgio took off his shoes and socks giving them to the poor lady he said « for your children ».

Pier Giorgio was a joyful young man who liked sport. He was a keen mountain climber. He found studying difficult but he wanted to become an engineer and serve the Church and young people. He asked for prayers to succeed and made progress thanks to his tenacity. His fellow students respected and appreciated his righteousness and his simple, ardent faith. Pier Giorgio rendered a thousand ordinary services joyfully such as rearranging the room after a meeting or preparing a celebration.

At the age of 17, he became a member of the Saint Vincent de Paul Society in order to give concrete help to the sick, orphans and demobilized soldiers. A man of Mercy, he frequently visited the poor. Pier Giorgio went out of his way to find a bed in hospital, a place in school, or lodgings… a torrent of good works in young student’s schedule !

At 17 he also obtained the right to receive Holy Communion daily. Up to this, his mother was opposed to this fearing it would be taken for bigotry. The Eucharist is at the center of his day and he remained faithful even when he went mountain climbing he rose at dawn.

At the age of 21he became a Third Order Dominican in which Mercy occupies a central place. He founded a society called « The Shady Guys ». They were a joyful band of laughing, young men playing tricks on one another with hoax telephone calls among other things. Pier Giorgio was joyful and pragmatic and he managed to solve the financial difficulties of a multitude of families.

Pier Giorgio contracted polio suddenly after visiting a poor family and died within six days. His grandmother was dying and Pier did not mention his illness for fear of « disturbing » the family. When they realized how serious his illness was, it was too late.

Pier Giorgio died at the age 24 on July 4th 1925. On the day of the funeral, thousands, among them the poor of Turin, for whom he had done so much, followed the funeral cortege to the church.

In 1981, his body was exhumed and found intact. The news pread and many thought that Pier Giorgio was a saint. His body was transferred to The Cathedral of Saint John the Baptist in Turin in 1981.