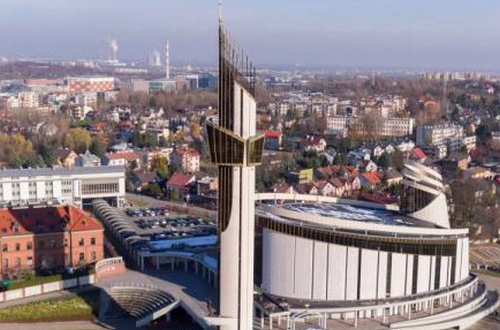 Jesus gave the Church the message of Divine Mercy through St Faustina. After her canonization in 2000, (Faustina was the first saint to be canonized in 2000), thousands of pilgrims flocked to Lagiewniki. Because of the numbers of pilgrims, the chapel became too small to accommodate them so a large Basilica was constructed. Il was consecrated on August 17th 2002 by Pope John Paul II who entrusted the whole world do Divine Mercy.

Pope Francis came on a pilgrimage in the Jubilee Year of Mercy in 2016. During World Youth Day, he invited young people to trust in Jesus’ Mercy. « Hello everyone ! Today, the Lord wants us to feel even more deeply His great mercy. Never wander far from Jesus, event if we think that because of ours ins and our failings we are the worst. He loves us as we are because in this way, His mercy spreads ».